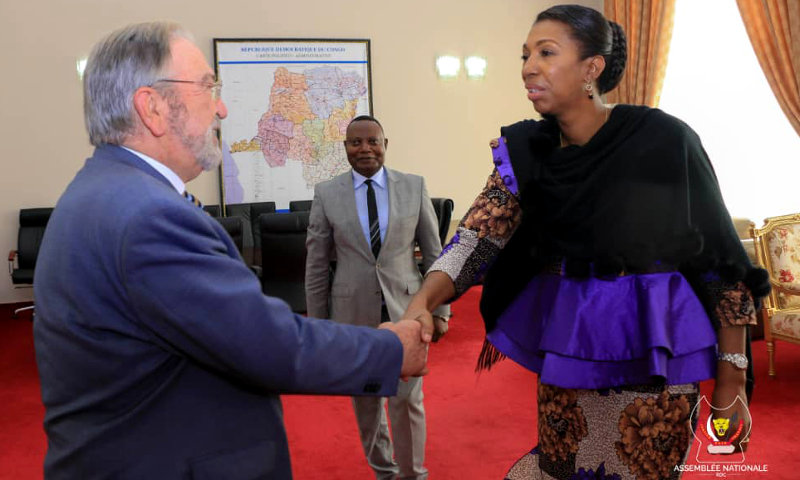 Internet
Kinshasa30-07-2019Politics - Received on Monday by the President of the National Assembly, the Belgian Minister, Herman De Croo, asked his host to encourage more deputies to be close to the people.

The Belgian Minister of State and former Speaker of the House of Representatives, Herman De Croo, exhorted the Speaker of the National Assembly, Jeanine Mabunda Lioko, to further encourage deputies to be close to the people to keep good cooperation with the supporters, it was during the a hearing she granted him on Monday in his office at the People’s Palace.

The Belgian Minister said the importance of his meeting with President Mabunda, the first woman elected within National Assembly of the DRC, with whom will manage more than 500 of his colleagues. On the economic level, Minister Herman De Croo also recalled that the Congo is more than its mines and that it should also focus on the agricultural, forestry, hydraulic and all that is renewed.

Because, he added, every year, a shovel of minerals that leaves the Congolese territory is a shovel lost forever, unlike a field that is cultivated today and which could be cultivated again next year. Herman De Croo, who has been in Kinshasa since the 21st, of the current month, had talks last Friday with the president of the Senate provisional bureau, Léon Mamboleo.

At the end of these talks, the Belgian Minister of State pointed out that Belgium was still interested in helping Congo, a sovereign country in the framework of bilateral cooperation.

He had also said that Belgium wanted to contribute to the renewal of the DRC, despite the enormous challenges associated with a galloping population. "Belgium is one of the important countries within the World Bank, six times members of the Security Council, this privileged place can help improve the economic, financial and humanitarian situation," he said.

Herman De Croo, who spent nearly 51 years in the Belgian Parliament, a long time member of the Belgian government, has created several friends in the DRC, and has always had many contacts with senior Congolese personalities each time he visits Kinshasa.