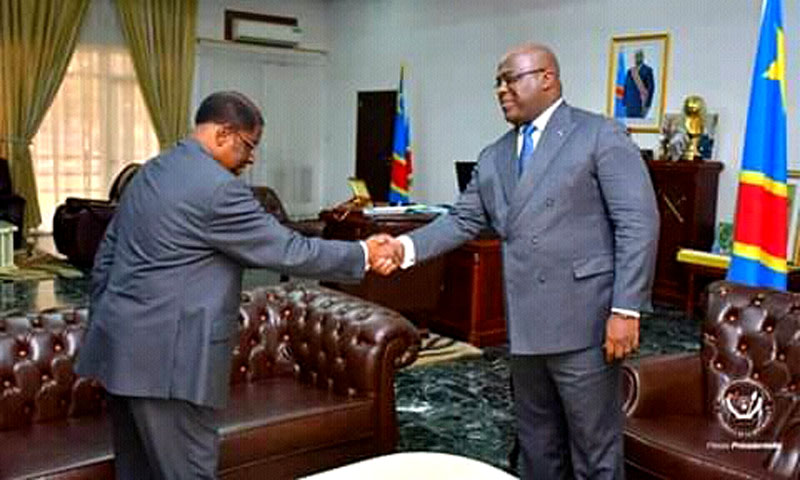 Internet
Kinshasa09-08-2019Politics - The Head of the State, Felix Antoine Tshisekedi Tshilombo received in audience, Thursday August 8, in his office located at Cité de l’ UA, the President of the Senate with the whole of his office lately elected.

Elected official since July 27, 2019 like Senate chair, Alexis Tambwe Mwamba accompanied by all the final office of the Upper House of the Parliament, was received this Thursday August 8, 2019, by the President of the Republic, Felix Antoine Tshisekedi Tshilombo.

It was a question of introducing the members of his office. The talks were focused on the Senate mission.

The President of the Republic exhorted the office of this institution to be worked for the higher interest of the nation and the needs of the congolese population.

The owner of the Upper House of the Parliament noted that it was a question first of all of presenting to the First citizen of the country, the final members of the office of the Senate before the other institutions of the Republic.

For Alexis Tambwe, it was normal that they are initially received by the Head of State. "I made a point of explaining to the president of the Republic that the Senate is a republican institution and which we will work for the higher interest of the nation". The members of the office will work in absolute symbiosis, in synergy with the Presidency of the Republic, he added.

In addition, Alexis Tambwe Mwamba underlined, President Felix Tshisekedi was very glad to receive them and he promised that, the office can count on his availability; he has just encouraged them to go ahead.