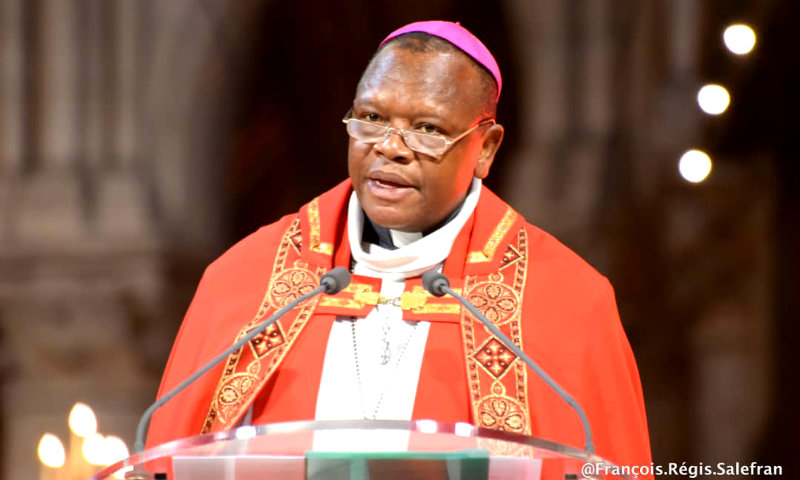 Internet
Kinshasa19-03-2020Society - The Archbishop of Kinshasa will address this day a message to believers of Kinshasa in connection with the pandemia of Coronavirus.

A message of Archbishop of Kinshasa, Cardinal Fridolin Ambongo in connection with the disease of Coronavirus is expected this Thursday.

It is in this framework that he convened this Thursday, a meeting of the senior parish priests. The announcement of it had been made by the Priest of the parish Sainte Anne and senior parish priest of Saint Pierre, Abbot Hubert Katawa at the time of the morning mass.

The Chancellor of the Archbishop of Kinshasa, Abbot George N’Jila confirmed this information without giving the motivations of this meeting. In a message issued in the social networks, he specifies:" cardinal archbishop invites to an emergency meeting and the coordinators of catholic and private schools, office of council at 10 hours at the Lindonge center".

The catholic prelate who will speak after the head of State, Felix Tshisekedi, who inter alia decided to ban the meetings of more than 20 people through the national territory.

Certainly that he will announce measures in connection with Coronavirus in order to protect the believers. The catholic churches are also concerned with this mesure. The catholic church of Kinshasa counts several schools and several parishes, thousands of believers. These institutions are among the Protestant and weakening churches which pullulate in the country certainly will be touched by this decision of the head of State. The last category for which certain persons in charge live from day to day of believers’ offering, certainly will pay the price of presidential measure.

Many believers went to Sainte Anne parish this Thursday morning in spite of the measures of the head of State suspending temporarily some activities of which those of the churches. But with regard to the worship which takes place each Thursday, it quite simply removed in accordance with the decision of the head of State.

With regard to Archdiocese of Kinshasa and diocese of Kisantu (as Saint Jean Apôtre at Mama Mobutu city ) in the framework of the fight against the propagation of Coronavirus, since last week the practice of the exchange of the sign of peace (which appear by a greeting or accolades between believers) and others gestures referring to this act are not more setting.

And priest, as of other extraordinary Ministers for the communion (Nkumu) wash the hands with disinfecting before distributing Eucharistic.

In certain parishes, following the example Sainte Anne, wash-basin and disinfecting are placed at the disposal of the believers in the entry of the churches.

This Thursday, the Catholic Church celebrates Saint Joseph. At Sainte Anne, Abbot Michael Mbuangi, one of the vicars of this parish requested so that this saint, the guard of Sainte famille can obtain from God the protection of all the families against Coronavirus.

Always within the framework of the fight against the propagation of Coronavirus, the pope himself in Rome in Italy celebrates since some days, the masses without the believers. Just as for soon 2 weeks, all the tourist visits in the Vatican have been suspended until April 10.

In addition, this evening at 20 H, according to certain sources, the pope invites the world where that one is, whatever his faith, or that one is not believer to observe one moment of meditation for the health of the world.