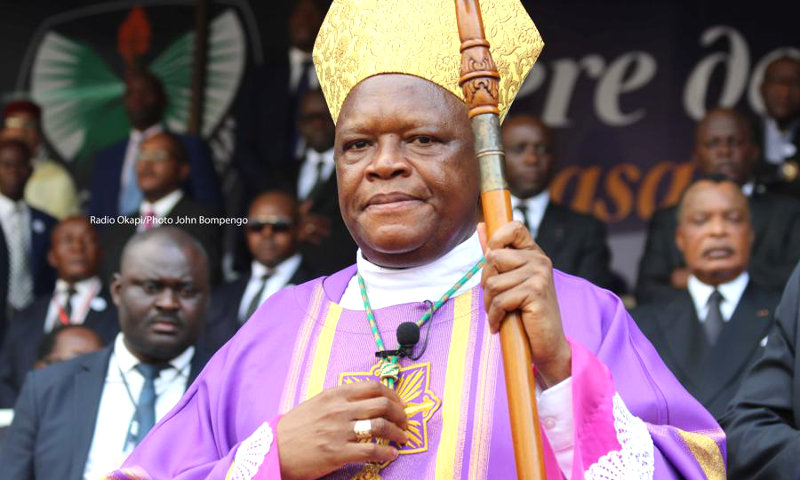 Internet
Kinshasa21-03-2020Society - The Archbishop of Kinshasa decides to suspend the public masses to warn Coronavirus.

The Archbishop of Kinshasa, Cardinal Fridolin Ambongo has just announced, in an official statement, for believers, priests and diocesans of his clerical jurisdiction, the temporary suspension of the public masses, within the framework the prevention against Coronavirus.

Greeting the measures taken by the Head of State with the aim of combining together the efforts to bar the road to the pandemia of coronavirus- he considered the danger which gets the world, the archbishop of Kinshasa made the decision to cancel the public celebration of the Branches. However, the priests will take care to organize a private celebration of Branches, reveals a source which stresses that this measure will be applied to all the Holy Week.

Cardinal Fridolin Ambongo also suspended the sacraments of baptism, the Confirmation, the marriage and the order. He has, for this purpose, asked for the priests to take care of the believers who need them, in particular the communion with the patients, the sacraments of penitence and reconciliation, the oiling of the patients as well as viaticum.

In the same register, he specifies that the pastorals visits are suspended and audiences reduced to the strict minimum.

The metropolitan archbishop encourages the personal prayers or in family in order not to lose the practice to kneel before the Creative Father, and exhorts the basic communities connected with the church alive (CEVB) to ensure the care of the priests and the vulnerable people.

In addition, the bells of the catholic parishes will continue to sound at the usual hours, the official statement underlines.

Cardinal Ambongo exhorts the diocesan media to adapt their grids of program by including there Eucharistic celebrations, the worship of Blessed Sacrament and other moments of televised radio prayer, in order to continue to support the believers spiritually.

"The preparatory retirement with the Easter will not take place and will be rather animated with the radio and with catholic television ", he let know.

He exhorted the believers and the servants of God to be involved in the response against this pandemia and especially not to yield to panic nor to lend ear to the false theories. «Entrusting to Christ, good Pastor who does not give up his ewes, we have the certainty to leave victorious of this test ", the clergy reassured.