FCC m arch: only a delegation will hand a memo at the Palais du Peuple 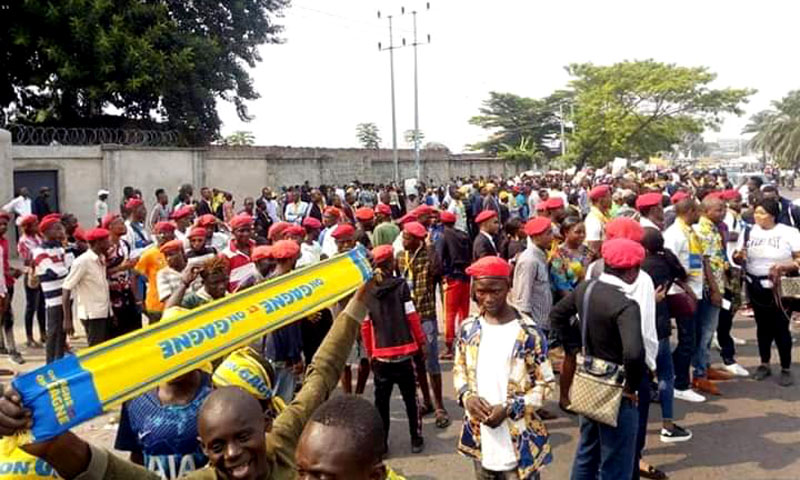 Internet
Kinshasa23-07-2020Politics - The police force which set up a device blocking the access to the seat of the Parliament, will authorize only a delegation of the persons in charge for the common Front for Congo (FCC) to hand their memorandum. Other demonstrators are asked to stay very far.

The platform of the former president Joseph Kabila which expresses this Thursday July 23 for in particular requiring the respect of the Constitution will had a memo at the seat of the Parliament, Palais du Peuple, Kinshasa. According to elements of the Congolese National police force found on the ground, only the persons in charge for the FCC who hold the memorandum will go to the Palais du Peuple to hand the document.

Several objectives go with the march by the FCC of this day. It is inter alia "supporting the Constitution and the institutions of the Republic, to promote and defend the unit and national cohesion and finally, to express its solidarity to the congolese people who suffer not only from the pandemia of Covid-19 but also of galloping and persistent inflation, including the insecurity in its East part".

The FCC, majority at the Parliament, went up against its partner of coalition, Felix Tshisekedi, after the orders signed by this last and countersigned by temporary while the Prime Minister, Sylvestre Ilunga, was on mission in Haut-Katanga. These orders relate to the installations within the army and the magistrature. For the FCC, these orders beach the Constitution. "It appears that the programming intention to breach the provisions of articles 79 and 92 of the constitution was manifest", denounced the FCC in a declaration read Tuesday July 21.

This platform points out that "these orders were neither proposed by the government, nor by the General meeting of the higher Council of the magistrature according to case, even less deliberated in the Council of Ministers, such as the provisions of articles 81 and 82 of the constitution prescribe, as well as article 7 of the organic law of 5 August 2008 concerning the organization and functioning of the higher council of the magistrature"