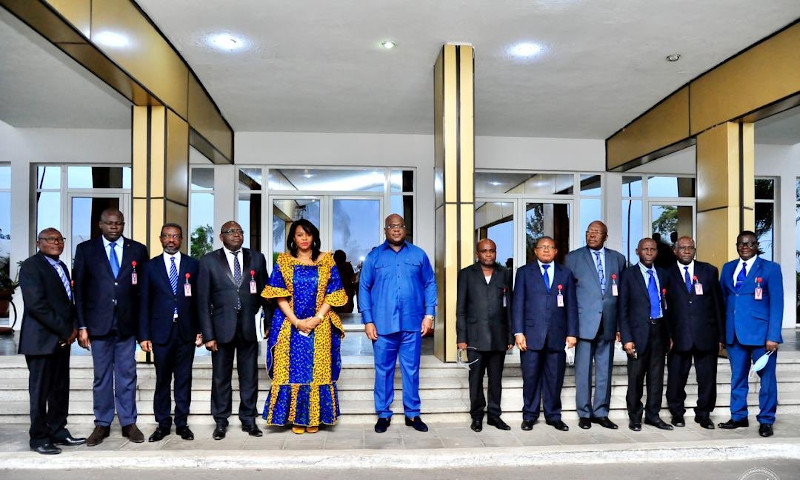 Internet
Kinshasa07-09-2020Society - The Head of State, Felix Antoine Tshisekedi Tshilombo has received in audience Sunday September 6, 2020 at Cité de l’Union Africaine, a delegation of the professors of the University of Kinshasa (UNIKIN) and National Pedagogy University (UPN), come to expose their claims to the base of a generalized strike movement observed for several months within the establishments.

The President of the Republic, Felix Tshisekedi, discussed this Sunday September 6 with a delegation of professors of the UPN and Unikin about a strike movement observed since the official resumption of the courses in various university establishments of the Democratic Republic of Congo, after the stop of the urgently state due to Covid-19.

Considering the urgency which is essential and as a guarantor of correct functioning of the institutes of the country, the President of the Republic Felix Tshisekedi Tshilombe determined himself to involve in personally for fitting solutions within the short time.

Reason for which, he devoted the day of this Sunday to listen to the complaints and claims remained a long time in the drawers without solutions.

He initially received the Association of the professors of the national teaching University (APUKIN) led by professor Raoul Ekwampok Kandum who pled for the improvement of social conditions of the professors, particularly the completion of certain buildings always in building site on the site of the UPN.

On another side, they got advantage to speak about the "over-payment" on the sale about the professors’ vehicles, a loss of earnings that the government promised to solve. These balances which result from the subtraction of the initial amount fixed by way of academic expenses and of the official funds fixed by the government would have fallen very slowly in the cases of the University from 2018-2019 and their wage situation reserved for the teaching body.

"To date, our wages fell of 40%", deplored one of the professors of the APUKIN by adding that the students also miss suitable place.

As a good father of family, the President was very attentive to the various complaints and promised to carry out a descent on the ground in order to palpate with finger the realities.

Always within this same University, Felix Tshisekedi also exchanged with the Association of the professors of the University of Kinshasa (UNIKIN), led by its president, professor Mathieu Bokolo.

For his part, professor Bokolo let know to the Head of State their specifications related to the loss of the purchasing power following the devaluation of the currency compared to the foreign currency. Increasing in their remunerations ever re-examined since more than 10 years, and other thorny points were also approached.

It is important to note that this meeting was facilitated by the honorary national deputy Franck Diongo, according to ACP.