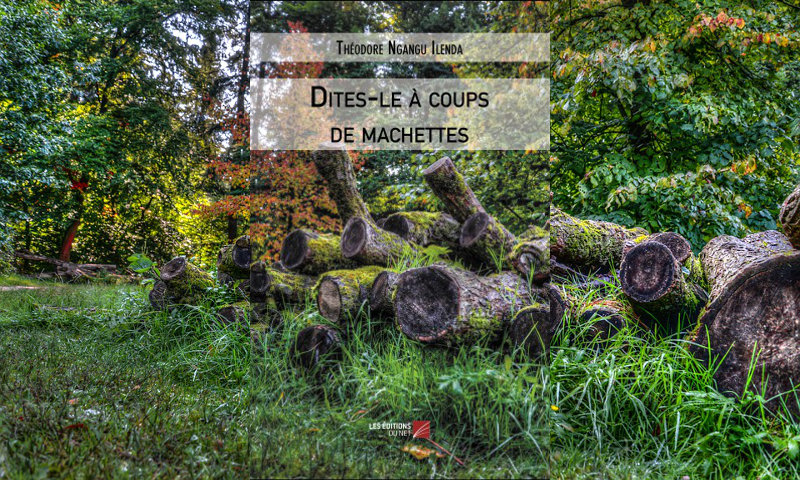 Internet
Kinshasa09-09-2020Culture-en - Théodore Ngangu Ilenda, congolese journalist, has just issued in the editions of the Net, a novel entitled « Dites-le à coups de machettes », means tells it by the means of machetes, to download on various numerical platforms of which Amazon.

In this narration of 78 pages, the author speaks about the thorny question of the industrial exploitation of wood by the forest companies and the way of putting aside the local communities which live of these forests, which they consider as their supermarket.

In this fiction inspired of a true story, a group of villager of Bosunga in the former province of Equateur in DRC plunders the site of exploitation of the "Congo Bois company" because of non-observance by this last of the clause obliging it to build a school, of agricultural service road and a hospital for the community.

As reprisals, a police operation is led to Bosunga. It would have ended by a murder, massive rapes of the women and malicious destruction.

The adviser in charge of the Human rights questions near the ministry of the Human Rights, Herve Okito is named to carry out a survey in order to disentangle the truth of the forgery. A very difficult task which will lead him to discover the militiamen known as "Baïmoto", a rebellious movement hostile to the power established in Kinshasa.

In this palpitating narration that should absolutely be read, the author stigmatizes, through one of the characters of his novel, the fact that predatory foreigners are ready to foment a rebellion movement to make low hand on the resources which they covet. Some local actors are also accused, because getting advantage of their social status; they are pleased to loot the national resources of the DRC.

Former Writer as a head of the daily newspaper Le Potentiel, Théodore Ngangu Ilenda is also a joint author of the work "the democratic challenge in DRC, assessments and prospects", issued in the promotion Africa editions, work of which he assumed the coordination and the supervision of the drafting.