Oath of the judges in DRC: the planted decoration, the FCC boycotts the ceremony! 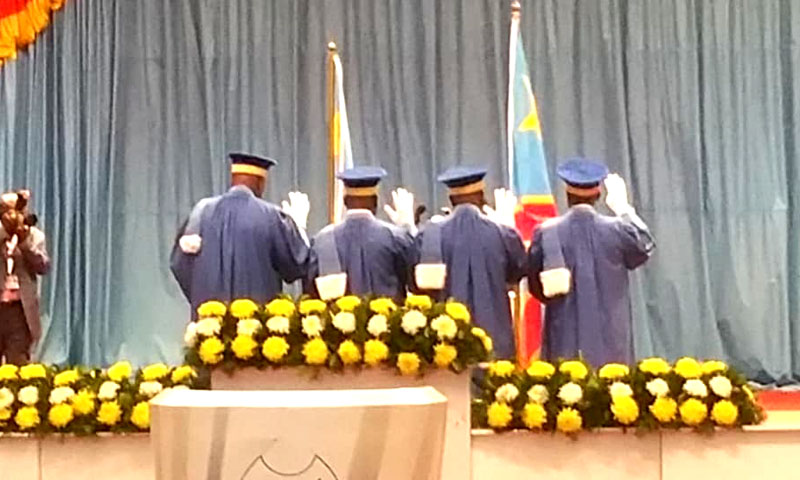 Internet
Kinshasa21-10-2020Politics - At Palais du Peuple where takes place, this Wednesday October 21, 2020, the ceremony of taking the oath of the 3 constitutional judges, several Ministers and deputies of the CACH or the opposition are visible into the room. But no members of the FCC who always dispute this ceremony.

At a few hours of the ceremony of taking the oath of the three named constitutional judges, last July, by the president of the Republic, Felix Tshisekedi, the decoration is already planted in the congress room of the Palais du Peuple. Several personalities belonging to the CACH political platform are present there- including Ministers and deputies of this political family.

But the members of the FCC, platform of the former president Joseph Kabila, boycotted this ceremony. FCC does not still agree with the orders naming these three judges. But the Head of State, Felix Tshisekedi decided to respect his decision. And in a declaration made public on Tuesday October 20, 2020, the FCC, once more, denounced intentional violation of the Constitution as for the nomination of these new judges at the Constitutional Court.

The FCC recalls that all its seniors will not attend the ceremony of taking the oath of the constitutional judges planned this Wednesday at Palais du Peuple. And at the same time, this platform calls the population of the Democratic Republic of Congo to resistance. "The FCC denounces the intentional violation of the seat of the Parliament and calls the population who massively voted by referendum the Constitution in force to be ready to resist and to be opposed to any attempt at passage in force tending to impose the accomplished fact of a new Court on the orders, sitting on serious violations of the basic provisions of the Constitution, leaving to any dictatorial drift".