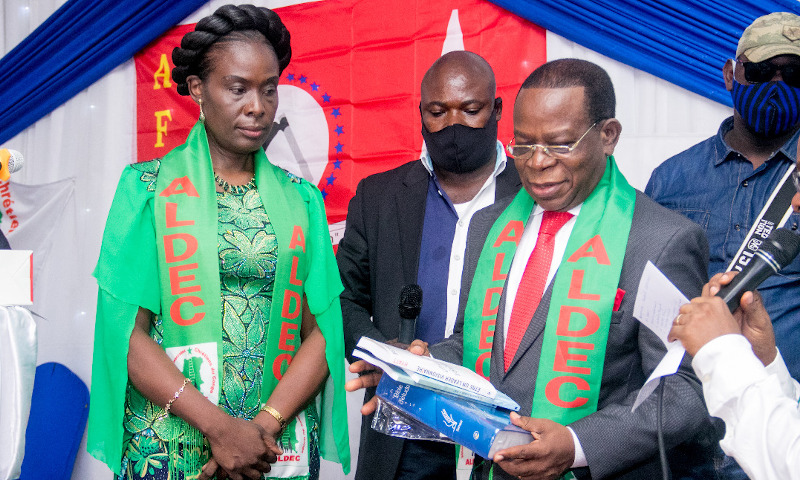 Internet
Kinshasa22-02-2021Politics - The political training of national deputy Adèle Kayinda Mahina sharpens already her weapons for the next electoral dates. For this purpose, the party settles starting from the base, in Tshangu, in Kinshasa.

The political party Alliance of the Christian Democrats of Congo (ALDEC), the party of national deputy Adèle Kayinda Mahina proceeded last Saturday 20 February, to the official installation of its federal committee in the township of Masina, district of Tshangu, in Kinshasa.

Chirac Bakama Tshey was thus designated federal president of this political party, member of the political regrouping Alliance of the Democratic Forces of Congo and Allies (Afdc-a). The ceremony of the official installation of this staff of Tshangu took place in the presence of the national president of this party, national deputy Adèle Kayinda. But also of the moral authority of Afdc-a, the senator Modeste Bahati Lukwebo who went to support the ALDEC, his political partner within Afdc-a.

In front of many partisans made up of the executives and militants of the ALDEC come from all the corners of the Tshangu district, the new promoted received the emblems and other badges of the party on behalf of the president Adèle Kayinda Mahina. This one required of the Chirac Bakama team to work for the radiation of the ALDEC and Afdc-a in its district of Tshangu with like watchword:"no parcel of land without ALDEC"…

For recall, ALDEC is one of the parties which make the political regrouping Alliance of the Democratic Forces of Congo and Allies (Afdc-A) whose statutory president is the senator Modeste Bahati Lukwebo.